The Mount Waddington Region - the northern third of Vancouver Island and much more...


The name conjures up several images, but what is this place, and where do you find it?

Established in June 1966, the Regional District of Mount Waddington is the governing body that provides local services, planning, solid waste, parks, and economic and tourism development services for the residents of Northern Vancouver Island and part of B.C.’s mainland coast.

Covering an area of over 8,000 square miles or 2,072,000 hectares, the Mount Waddington Regional District stretches from Keta Lake to Brooks Peninsula to Cape Scott on Northern Vancouver Island, and reaches from Cape Caution up to the birthplace of the Klinaklini River and back down to Johnstone Strait on B.C.’s rugged mainland coast.

The regional district encompasses a number of settlements, including the municipalities of Alert Bay, Port Alice, Port Hardy and Port McNeill, and presents a variety of geological features like deep coastal fjords, glacier fields and long wide valleys.

But the crowning jewel, the highest mountain in the District and the Province, is Mount Waddington. Situated at the head of Knight Inlet and reaching 13,177 feet into the clouds, this massive peak is a lofty namesake for a region that has proud beginnings and a promising future.

The name arises from more than the mountain, however. Farsighted politicians recognized the value of adopting the name of one of British Columbia’s most controversial and inspired pioneers – Alfred Pendrill Waddington.

He was probably the first to push for the union of the colonies of Vancouver Island and British Columbia, was largely responsible for the incorporation of the city of Victoria, and was perhaps best known for his proposal to build a road to the head of Bute Inlet and construct a railway bridge across Seymour Narrows to Vancouver Island. Few historians have done justice to the man who gave this regional district his name. He died of smallpox.

Basic Maps of the Region

If you would like  to know more about the region's communities, please explore the communities section of the website.

If you are seeking information about visiting the region, please visit Vancouver Island North Tourism. 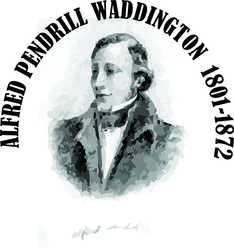